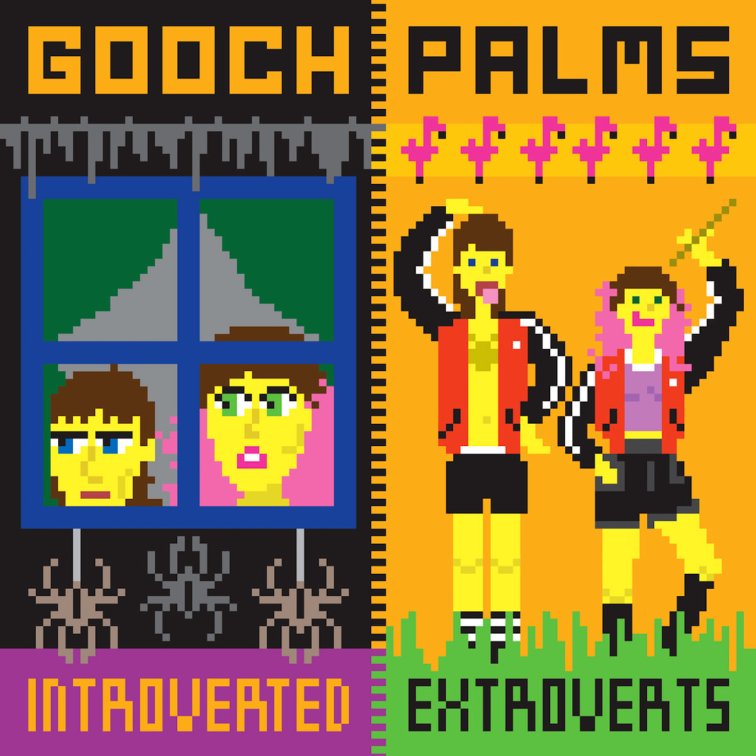 I first heard the Gooch Palms (what a band name) back in 2013 with their debut LP Novo’s.  Novo’s was a good garage rock album in its own right, and then last year, the band released their “Trackside Daze”/”Sleep Disorder” 7″.  That single hinted at real progression from an already more than solid start, and I’m happy to say that Introverted Extroverts is even better than their debut.

The main things this can be credited to are better production, a greater focus on pop melodies, and usual lead vocalist Leroy Macqueen fully realizing and executing on how best to use his voice.  The Gooch Palms like to call themselves “shit-pop” and while I wouldn’t go nearly as far as to call the production on Novo’s shit (it’s lo-fi garage rock, whaddaya expect?), the mix and mastering didn’t allow the songs to pop quite as much as they could’ve.  The songs on Introverted Extroverts sound much more powerful, which particularly serves the no-frills, but efficient drumming, which now satisfyingly jolts me every time Kat slams her kit.    This is still garage rock though, so everything still has that authentic sound and hint of rawness.

The songs on Novo’s were well written enough, but on this album, the band tightens up, refines their song craft, and makes a slight stylistic shift.  It wouldn’t be much of a stretch to call Introverted Extroverts a throwback doo wop record, or even a power pop record.  The songs are for the most part slower as well, giving each note more room to breathe and have more impact.  The melodic improvements, as well as Leroy’s vocal performances, help keep this simple approach interesting.

Leroy’s vocals are mixed far higher than they were on Novo’s, and you need a great vocalist to warrant a change like that.  Luckily, on this record, Leroy’s emerged as my favorite vocalist in Australian rock this side of Shogun and Nick Cave, which makes sense considering Leroy’s shifting between raw, emotional howling, and brooding croons.  He’s also got a little new wave in there too, whatever that means.  His versatility plays a huge part in making this record sound as dynamic as it does with such a straight-forward musical approach.

As far as the songs go, it’s difficult to pick standouts as it’s a remarkably consistent record.  The new version of “Trackside Daze” is better than the original, which had already thrilled me.  “Sleep Disorder” and “If You Want It” are a couple rollicking punkers where Kat takes the mic to keep things interesting.  The A-side in general might be a tad stronger than the B-side (first 4 songs are this kind of music at its finest), but the B-side has the closer “Wasting No Time”, which I’ll say is my favorite here and on the shortlist for best song of the year right now.  There are some cool minimalist synths which serve as Leroy’s only backing during the verses, then the song explodes into an epic crescendo of rock ‘n’ roll for the chorus.  This is where he provides his most emotional performance.

This is a excellent garage pop album.  The two member, guitarist and drummer garage band thing should be stale, but the Gooch Palms breathe new life into it here.  Introverted Extroverts is the opposite of a sophmore slump, and the opposite of shit.

You can buy the vinyl from Summer Camp and the cassette from Burger.

Music video for “Ask Me Why”: